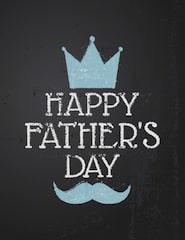 This coming Sunday is Father’s Day. My dad died in October 2006 from complications of Alzheimer’s. He was very influential in my life. We spent a lot of time together and he was immensely supportive of everything I did. He came to as many of my sporting events as he could, always embarrassing me with the loudest cheers. He taught me to play backgammon and gin and always played fair and square never, “letting me win”. He taught me to ski and how to write a business letter. He let me tag along on any outing mostly because he liked my company. He spoiled me and he yelled at me. For years I thought he was perfect. I’ve since come to know he was just a man, just human.

There are so many children who grow up without their father. According to the U.S. Census Bureau, 24 million children in America grow up in homes where the father is absent. That’s 1 in 3. Sometimes this is due to an absent parent, incarceration, or just plain old divorce. In rare occasions, the father isn’t a stable and positive member of society and when that is the case, it’s understandable that the child wouldn’t have interaction with the father. However, that is not the majority.

When we keep our children from having access to their father it can negatively impact the growth and welfare of that child.

“Children whose fathers are stable and involved are better off on almost every cognitive, social, and emotional measure developed by researchers. For example, high levels of father involvement are correlated with sociability, confidence, and high levels of self-control in children. Moreover, children with involved fathers are less likely to act out in school or engage in risky behaviors in adolescents.” Source: Anthes, E. (2010, May/June). Family guy. Scientific American Mind.

I was lucky. My dad was a constant in my life. Maybe an annoying constant at times but he was there and it made a difference in my life. So here’s what I know and learned from my dad being in my life:

There are so many other things my dad taught me and things I learned to do and not to do. We have many people that come into our lives to teach us. I reflect on my father often and love all that he taught me in my life – the good and the bad. I don’t need Father’s Day to remember him but it’s a nice excuse to devote some extra time to his memory.

2 Comments on “What I Learned From My Dad”