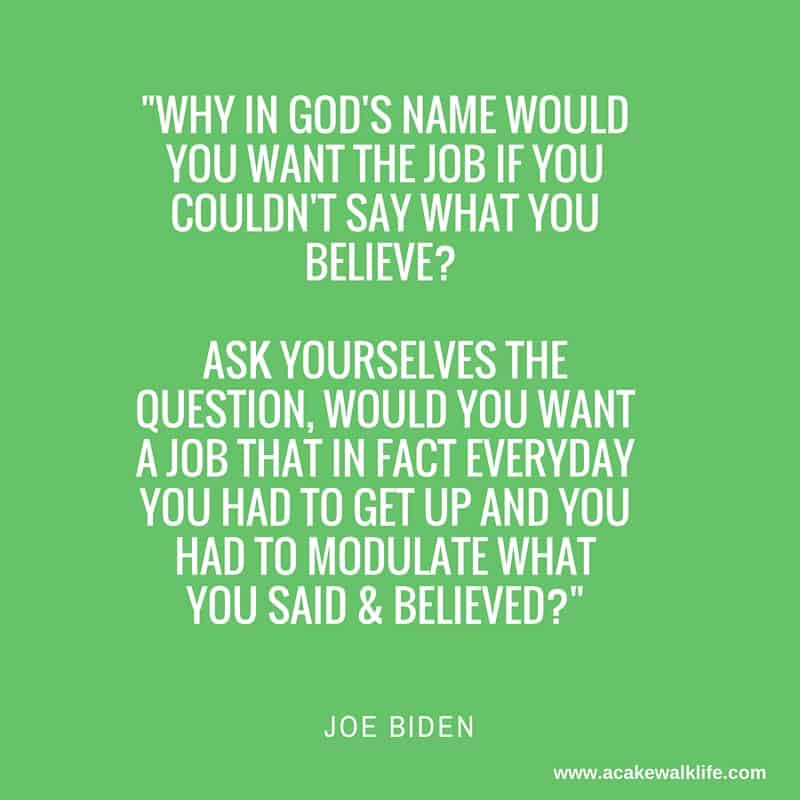 Last week Joe Biden was on the Late Show with Stephen Colbert. The interview was emotional and touching. Stephen asked him about his son Beau who died this year. He talked to him about his role as Vice President. I had never thought much about Joe Biden but after this interview, I saw a much different person…an emotional, loving, real human being.

Naysayers and negative thinkers will default to, “He’s a politician. You can’t believe anything he says. He’s probably just trying to lay the foundation for the election year”. So take politics out of the equation and just listen to the content.

This isn’t about Joe Biden the person. This is about something he said during that interview when talking about the job of President of the United States. He said, “Why in God’s name would you want the job if you couldn’t say what you believe? Ask yourselves the question, would you want a job that in fact every day you had to get up and you had to modulate what you said and believed?”

This isn’t about politics. This is about you, a human being, going to work day in and day out to do something that you don’t believe in. This is you, going to work and working for a company whose values don’t align with your values. This is you – not even knowing what your values are because you’ve set them aside for the company you work for.

I loved Joe Biden’s quote. We have to do work we believe in. We can’t go to work and alter who we are, how we think, and what we believe in. Americans spend an average of 47 hours per week working (over 47 hours per week for many people). That’s a lot of time spent doing something that is out of alignment with you. When we live out of alignment with our core values, we experience a host of emotional distress such as depression, anger, or restlessness. We find ourselves getting sick. We try to counter these intense emotions with more activities or escape through a host of methods. It won’t work. You’ll continue on a roller coaster of highs and lows.

I know it’s not easy for everyone to just walk into their manager’s office and say “I Quit!” I know many people are wishing, at this exact moment, that they could do just that. I know I’ve wanted to say it and skip out the door with zero plans for my future. But I, like many people, just can’t do it this way. We have bills to pay and people that rely on us so we have to be more thoughtful about it and less like our inner 16 year old.

So if any of this rings true for you, begin today by recognizing that it’s not working for you. Recognize it and then start taking steps to create a different future for yourself. The journey from crappy, stressful job to skipping and loving your life isn’t a straight path. It’s long and windy and probably won’t be like anything you think it will. The one thing that I do know? You will never, ever look back at your crappy, stressful, soul crushing job and think, “Why did I leave? I really miss it”.

2 Comments on “Is Your Work In Alignment With Your Values?”