Today is a blue moon, which means it’ 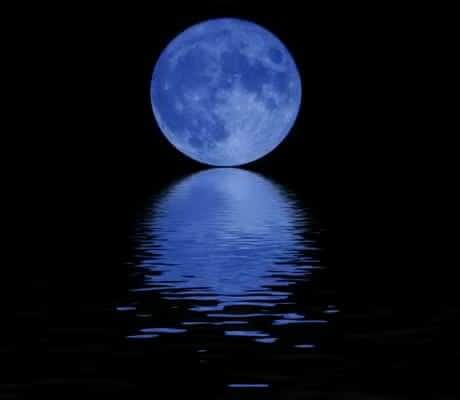 s the 2nd full moon in the calendar month of August.  Normally, we have only one full moon per calendar month.  The old saying “once in a blue moon” comes from this occurrence and came to be a saying for things that didn’t happen very often.  It was a rarity.  The next blue moon isn’t until 2015.  The last time we had one was in December 2009.

The feeling of “once in a blue moon” is a chance to do something unique and that you won’t be able to do again soon.  It feels like a meteor shower or an impromptu invitation for a trip.  It feels special and magical.

It also reminds me of the 1980’s era TV show “Moonlighting” starring Bruce Willis & Cybil Shepherd and their Blue Moon Detective Agency.  I’m acknowledging this blue moon by buying the series DVD collection.  I’m excited to see the old episodes with Cybil always shown in the soft white fuzzy light and Bruce with his sexy smirk and comical lines like “Do bear’s, beareth?  Do bee’s beeith?”

Seriously, it does make me wonder what would I do with a rare opportunity?  What do I want from this rare occurrence?  Astrologically speaking, this blue moon is about letting go of past restrictions.  How have you restricted yourself?  Could this blue moon be an opportunity to open up, see yourself in a new light and move forward feeling free and supported?